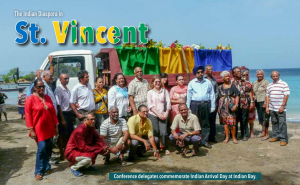 At the age of three, James came with his parents whose last name was Seetaram.

See below an excerpt of an interview 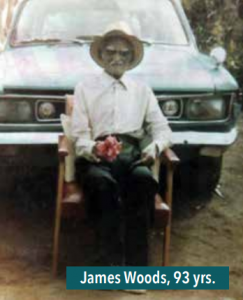 by Kumar Mahabir with 93-year-old
James Woods in Richland Park in 1982.
James father arrived on the ship Countess
of Rippon in 1866 which sank off
Barbados. They were then transported
to St. Vincent on the H.M.S. Wolverine.

MAHABIR: Did your father have
problems – as an overseer – with
workers on the estate?

WOODS: All the Indian people, if they have any case, they go bring it to
him. He go set the case. If he say you wrong, you wrong. If he give a judgement, you don’t have to go through magistrate. The Indians used to set
they own case [pan-chait]. They call all the people – estate people. He take
evidence from them. They no used to go to no court at all. He used to be the
… am … judge. He left Argyle in 1905 when he bound done.

MAHABIR: Did he live in the estate barracks?

WOODS: He been have a separate house because he was an overseer.
And if anybody dead and you have a child (nine days), it used to have big
dance and all kind of thing. You have a daughter who go married, some buy a gallon of rum, some buy half gallon … according. And two pound a rice, three pound of rice … according. They invite all the Indian; the woman them, the man them. The woman from Richland Park went to sing in the house. They knock drum [dho-lak] and sing and dance and thing