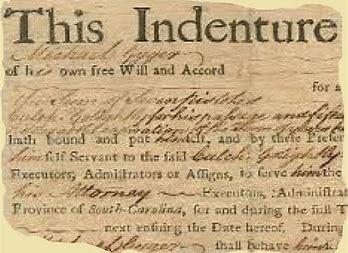 An indentured servant or indentured labourer is an employee (indenturee) within a system of unfree labour who is bound by a signed or forced contract (indenture) to work for a particular employer for a fixed time. The contract often lets the employer sell the labor of an indenturee to a third party. Indenturees usually enter into an indenture for a specific payment or other benefit, or to meet a legal obligation, such as debt bondage. On completion of the contract, indentured servants were given their freedom, and occasionally plots of land.

In 1838, with the abolition of slavery at its onset, the British were in the process of transporting a million Indians out of India and into the Caribbean to take the place of the African slaves in indentureship. Women, looking for what they believed would be a better life in the colonies, were specifically sought after and recruited at a much higher rate than men due to the high population of men already in the colonies. However, women had to prove their status as a single and eligible to emigrate, as married women could not leave without their husbands. Many women seeking escape from abusive relationships were willing to take that chance.

The Indian Immigration Act of 1883 prevented women from exiting India as widowed or single in order to escape. Arrival in the colonies brought unexpected conditions of poverty, homelessness, and little to no food as the high numbers of emigrants overwhelmed the small villages and flooded the labour market. Many were forced into signing labour contracts that exposed them to the hard field labour on the plantation. Additionally, on arrival to the plantation, single women were ‘assigned’ a man as they were not allowed to live alone. The subtle difference between slavery and indenture-ship is best seen here as women were still subjected to the control of the plantation owners as well as their newly assigned ‘partner’.