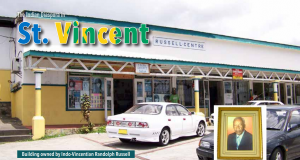 Today, Indo-Vincentians comprise
about 5,000 (5%) of the total population
and are scattered in several villages.

The first ship to transport East Indian labourers to St. Vincent from Madras was the Travancore with 260 persons on June 1, 1861. The last boat Lightning) took 213 indentured Indians on May 22, 1880. The total number of Indians imported to St. Vincent was 2,474. The total number who received “back passage” to India was 1,141 (42%). Today, most Indians are concentrated in Richland Park, Calder and Rosebank as well as Akers, Georgetown, Park Hill and Orange Hill.

The first group of Indian immigrants to St. Vincent had misspelt names such
as Mooneesawmy, Soobeen, Ragvaloo and Weeraphen. Their children were
baptised and given the Christian names of their godfathers, who were either estate managers or drivers. Formerly Hindus and Muslims, all Indians in St. Vincent are now Seventh Day Adventists or other types of Christians.
Except for the traditional method of cooking with curry and other spices,
Indians in St. Vincent have lost all major aspects of their traditional culture
such as religion, kinship patterns, joint family and caste. But according to anthropologist Linda Stone (1978), they tended to form a separate identifiable group compared with their counterparts in St. Lucia, Grenada and Jamaica in two distinct ways. First, they were inclined to reside together, and second, they married each other.

Historian Monica Regisford (1976) notes that there were several cases where Indians had married their cousins.